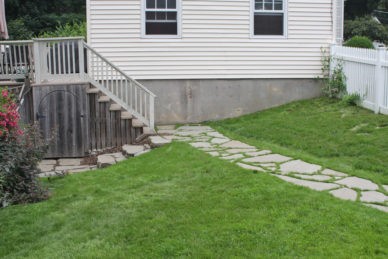 To get from the house to the gardens,  don’t be trodding over that nice grass you so meticulously take care of every week.  A garden pathway is the perfect solution for keeping that grass nice and add a beautiful feature to you back yard.

Garden paths are useful in that they help you avoid stepping on plants when working in the garden, as well as creating a more coherent landscape theme. Garden paths can also make a garden look more professional and can provide an accent to certain plants along the garden paths if done correctly.

In the following article from gardeningtipsandideas.com, you will learn about the different types of garden paths and how garden paths can improve the coherency of your garden.

Unless you garden indoors, or on a balcony, or on a tiny crevice somewhere in the abandoned outback, moving around your garden can only be facilitated by some form of pathway. Garden paths are the route we take to get from point A to point B and give us access to to our garden beds and other features and resources that reside in our yards. While paths serve a practical purpose they also add aesthetic appeal to our gardens. The veins of our garden architecture can be so much more than mere accessways. In fact, many gardens are highlighted by their paths that accentuate the plantings and other features. The real beauty of pathways is that there are no rules. Garden paths can be constructed from almost any material and can be installed within a few hours, a weekend or, for those very intricate and detailed jobs, many months. 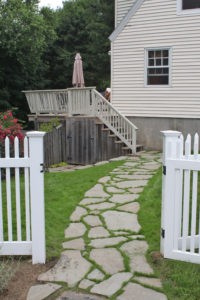 While stepping-stone paths are usually based on a stepping platform raised above ground level, insets are paths that are set at ground-level or below. They are created to seamlessly mesh into the environment in which they will reside.

Some of the easiest paths to create and maintain are ones that are created with pebbles or stones. Gravel, aggregate, river stones, crushed bricks and crushed limestone – there are many more – are great options for weaving a pathway through your garden.

Paved paths can be traced back as far as the Romans as their roads were all built with paved clay-fired bricks. And there’s no prizes for guessing what they perceived as the benefits such construction. Strength, endurance and the durability to weather the elements were all positives for this type of pathway. 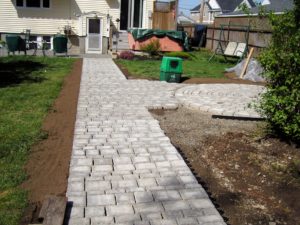 Pathways don’t have to be constructed on the horizontal plane all the time. While we usually consider a pathway to exist by the material that we’re walking on, we can also consider a path when it is created by borders or via the vertical plane.

While this isn’t an exhaustive list of all the pathway possibilities, it should whet your appetite to discover more or to be creative with your own resources and mediums. Garden paths are more than just a way to access your yard and can be one of the great landscaping masterpieces that sets your garden off.

Whether you want stepping stones, inset paths, pebbled paths, paved pathways, or vertically-defined paths, garden paths will enhance the beauty of your garden.

You will be thrilled to show off your garden paths to your friends, who can now stroll through your landscape with ease and admire the work that you put into your garden.

Camosse Masonry Supply is a leading provider of landscaping, stone and masonry products for homeowners and contractors in Massachusetts.